The disruption caused by the fire continues, with roads still closed around the whole area.  To get to Bracknell from Crowthorne last night we had to drive all the way to Jennetts Park near the A329M and then back on ourselves past the Waitrose depots.  Many road closures are manned by police, who seem happy to talk to people about the events of the day.  Several residents have spent a second night away from their houses after being evacuated, I feel for them and hope they get back to their intact homes soon, ready to start clearing the smell of smoke which has soaked everyones clothes and houses.

We went for a walk last night into Wildmoor Heath, around the back of our house, and although there have not been any major fires here, there were some small places with charred trees and fences.  The place was unusually quiet, with less road noise coming from the closed bypass and a stillness in the air that we hadn't experienced for a number of days.  With the wind dying down a little, we hope this will help the fire fighting effort which is still very much ongoing.

On a practical level it seems that schools that were closed yesterday, have re-opened today.  I respect the decision was made with good intentions, but was it really necessary? Was it smoke and wind direction or was it to keep traffic off the roads?  Let me know what you think. 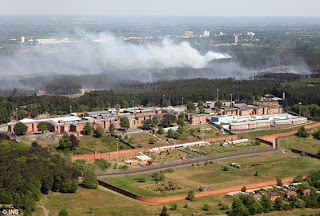 The Daily Mail, in true Daily Mail fashion, has grasped the story too, focusing on how close the fire came (has come?) to Broadmoor.  Can you imagine the operation if they had to evacuate that place?

Of course, we continue to hear about the hard work and dedication of the people that are fighting this fire on the front line.  They all deserve huge recognition.  The Golden Retriever pub which was evacuated on Monday - not least because it has a thatched roof - has been turned into the Fire and Rescue HQ offices.  The pub is obviously closed to the public, but it is now patronised by fire fighters during their well earned breaks.  I couldn't think of a nicer place to re-group and refresh.

Finally, lots more photos emerging from people, some of which are very good.  I haven't been out with my camera yet, I was going to focus (no pun intended) on the aftermath, when it finally dies down.  Two good sets of photos from other talented people, not me.