Camera not in use (yet) 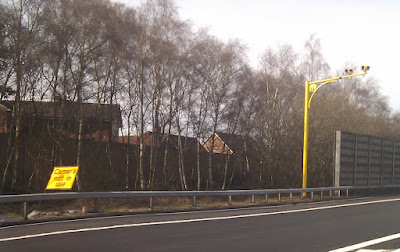 If you've driven on the motorway recently you may well have spent the vast majority of your journey riding the 50mph road train.  It seems to me that I spend more time being enforced by the yellow cameras than driving along at normal motorway speeds.
What's more, the highways agency (or whomever runs the nanny-cams) could well save a heap of money by deploying signs next to cameras that tell us the ones that are actually in use!  For over the past few months, especially in the south,  nanny-cams have started sprouting and staying put, long after the roadworks they were protecting have been mothballed.
So why aren't they being taken down?  Maybe it's cheaper to leave them be, waiting for the next set of roadworks to spring up, but the cynic in me fears something more sinister like road pricing or a national speed camera network.  Both are technically possible because the nanny-cams read number plates of passing cars.  At the moment, this is used to work out the speed of said vehicles between 2 points, but it could equally be used to prove you were on that road at a certain time.
With the upcoming election, I did a little research to see what the views of Nick, Gordon and Dave were on this subject.
Nick...
Wants a road pricing scheme and would charge road freight per mile on the motorways (keep 'em coming and staying).
Gordon...
Says that he won't introduce road pricing in the next parliament.  (The camera network won't be complete before then).
Dave...
Doesn't mention road pricing as such although says he wants foreign lorries to pay to use our roads (just introduce enforced refueling at Dover).
I'm not even going to consider The Greens, they'd remove what little joy there is left in driving.
So maybe it just my paranoia, the nanny state or a general distrust of the government but all 3 major parties (and the hopefuls too) have a published reason to leave these things in situ.  Next time you're stuck in the 50mph road train, just remember the fuel economy benefits, it's the only positive I can think of!
Posted by Chris at 11:38