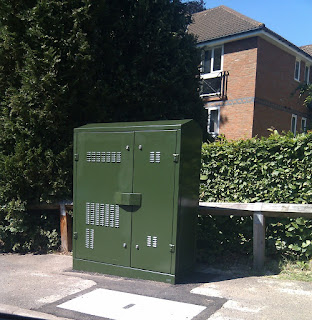 Back in 2009, British Telecom announced a number of UK locations that would be getting their new "super-fast" broadband.  The village where I live happened to be one of them, and it is due to come into service at the end of the summer.  Well, I'm pretending not to look surprised, but it appears they are on target to deliver on that promise.
The new broadband is known technically as Fibre To The Curb/Cabinet (FTTC) and means that instead of old copper wires between you and the telephone exchange, BT provides a half measure by bringing fibre optic cables to a green box, a bit closer to your home.  You still have copper wire coming into your home, but the length is shorter and so it can support faster speeds.  It's like moving your house closer to the main telephone exchange!
In Crowthorne over the last few weeks, the old green boxes have been replaced by huge new ones.  The one above is on the corner of the Sandhurst Road and Byron Drive.  It's in a completely new position where previously there was none.  I've spotted others on the Crowthorne Road towards Sandhurst, on the corner of the High Street and Wellington Road, outside Co-op on the High Street and at the end of the High Street opposite The Prince. 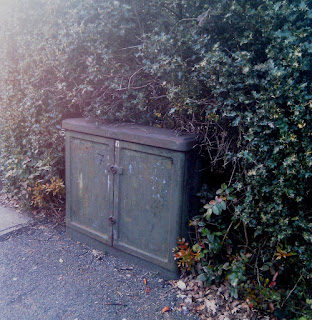 However, I'm disappointed to say that the rather sad looking green cabinet closest to me, is yet to be upgraded.  Out of all of them, I'd say it needed the upgrade the most.  See what I mean?
So when will Crowthone residents be able to order FTTC broadband?  Well, the Ready for Service date is still set as "late summer" according to Samknows.com. But unless you currently use BT, getting the new service from your existing service provider might be challenging.  Most recently Zen Internet have announced they will be starting trials, and Plusnet, AAISP, and Griffin have publicly stated their intentions to support the new service.  In my opinion, it's unfortunate that the majority of end-users will still choose to give their hard-earned to BT by default.

UPDATE 14/7/10: Having just had a chat with the contractors causing traffic jams working at the end of Pinehill Road, and having a good nose at their efforts, I can confirm there's another DSLAM going in at the junction of Pinehill Road and Sandhurst Road.  Cables have been pulled under the road from the Green PCP pictured above to a new DSLAM site on the corner.  The DSLAM is not yet installed but the concrete mounting and the cables are in place and currently visible.  The end of September is the estimated ready for service date.  Let me know if you see any more works going on around Crowthorne.